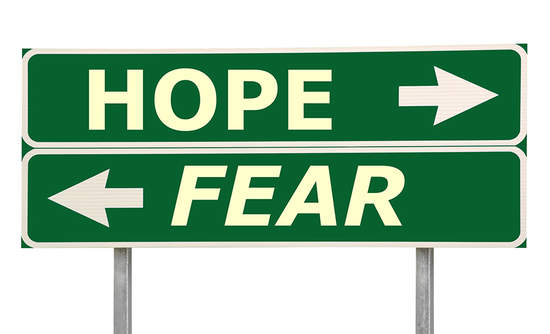 Hope and Fear are a driving force of lung cancer

I have been thinking more and more about surviving cancer and the hope and fear that drive me. I have lived this every day and every night for the past twelve years.

The third of October was my 22nd anniversary with lung cancer (1997). At that time there was very little support for cancer patients, especially for lung cancer. There was a local cancer support group and the American Cancer Society. But no one explained what it meant, this life after cancer, this surviving cancer, the hopes and fears that define it.

“Fear is the prompt. Hope is the way. Fear is about trying to survive something. Hope is about knowing why you want to.” President Obama

My life surviving lung cancer has seen many, many changes. Some of the changes take place out of necessity and gradually, like any physical adjustments that need to be made for my breathing limitations, or making better food choices and exercising. When I first started exercising, many women had not begun to do this. I was on my own, with little to no supervision. When exercise tapes, and then DVD’s hit the market, I pushed on and used those as guidance. I needed to shed the weight I had gained after I quit smoking. If I was going to survive cancer than I felt that I also had to intentionally improve all aspects of my life.

It’s been many, many years since my foray into these life changes, but one thing that I can say is that hope and fear have been prevalent throughout them. Who can escape these after cancer? They are prevalent because we don’t know what the future will bring, ever.

My first cancer was a fast growing but easy to remove cancer in my right lower lobe. I had a lower lobectomy and tada: I was finished. I was living a very, very happy life after that and hardly gave a thought to a recurrence. My doctor reassured me that I should do fine. Why should I have thought differently? But my seemingly very healthy, happy years came to an end on my tenth anniversary celebration with a dreaded call; I had a second cancer. A different hunter was knocking at my door almost to the day, ten years later.

This time it was called multi-focal adenocarcinoma of the lungs. This meant that I could – and would – grow more than one lesion at a time in one or both lungs. It was a sub-NSCLC, and mini cancer, as my oncologist likes to call it. The lesions could come and go and come back again. They could grow or stay stable, or grow and need to be removed. Or they could stop all together.

I have already begun to feel that fear that creeps up on me and stops my breath. It might be back. But then I have to look back and think: but it might not be, things might still be stable.

It’s been two years since my last cancer. Maybe I’ll have another one or two before the next? It’s the fear and hope that keeps me on edge; the might, might, might that holds me in its grasp.

3 thoughts on “Hope and Fear”